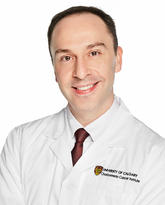 Lead of Science Communication and Director of the Charbonneau Microscopy Facility

From the moment of our conception, our DNA is subject to damage, the most serious form being a break in both strands of the DNA double helix. Unless these breaks are resealed correctly, whole segments of our genome can be lost or irrevocably mutated to fuel a self-propagating process of volatility that underlies cancer formation, radiation poisoning and/or premature cellular aging. Our research focuses on slow-repairing DNA double strand breaks induced within densely compacted heterochromatin and/or by high linear energy transfer ionizing radiation such as alpha particles emitted by radon gas. We are especially curious about DNA double-strand break repair processes involving nucleosome remodeling enzymes. We are taking forward our discoveries into the community, conducting wide-scale radon gas exposure testing and aiming to understand how the radiation emitted by radon impacts our bodies and who, based on our genetics, may be the most sensitive to cancer following radon exposure. Discoveries in these areas are improving our knowledge of cancer formation, human ageing and radiation protection.

To test your home for radon whilst also contributing data to research, please visit  www.evictradon.ca for more information.

Dr. Goodarzi is also the founder and leader of Evict Radon, a non-profit group and REB-approved transdisciplinary national study aimed at understanding and engineering out radon gas exposure from the Canadian residential environment, as well as reducing the future incidence of radon-induced lung cancer by encouraging citizens to test for radon and share their findings with cancer researchers.