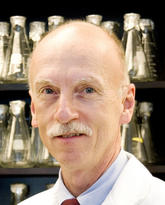 Dr. Gregory Cairncross is the former Director of the Charbonneau Cancer Institute and former Head of the Department of Clinical Neurosciences at the University of Calgary. After graduating in Medicine from Western University, he trained in Internal Medicine in Toronto and in Neurology in New York, before joining the Department of Oncology at Western, where he remained until 2002. At Western, he founded the brain tumor research program, was Chair of the Department of Oncology and Director of the Cancer Centre. He was the founder of the Brain Tumor Site Group of the National Cancer Institute of Canada Clinical Trials Group and currently holds the Brain Tumor Research Chair at the University of Calgary.

Dr. Cairncross is best known for contributions to neuro-oncology. He discovered that oligodendroglioma, a type of brain cancer, is sensitive to chemotherapy, and he and David Louis co-discovered a molecular marker of their drug sensitivity. Testing for this marker is now used worldwide to guide the treatment of patients with oligodendroglioma. A trial led by Dr. Cairncross showed that patients with this genetic subtype of oligodendroglioma live twice as long when chemotherapy is a part of their treatment. His contributions to the understanding and treatment of brain cancer have been cited nearly 50,000 times.