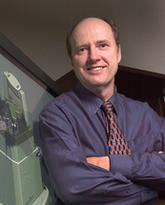 Dr. Garnette Sutherland completed his residency in Neurosurgery at the University of Western Ontario. His first appointment was at the University of Manitoba, in both the Departments of Surgery and Pharmacology.  There, in addition to his clinical work, he established an experimental laboratory, one of the first of its kind, for the study of neurological disease using MR imaging and spectroscopy. In 1993, Sutherland was appointed the head of Division of Neurosurgery at the University of Calgary. In collaboration with NRC-Canada, he developed the world's first intraoperative MRI system based on a moveable l.5T magnet. With MDA, Sutherland also developed neuroArm, an image-guided MR-compatible robotic system. In 2004, Dr. Sutherland received the Manning Award of Distinction for this work, in 2007, the Alberta Science and Technology Leadership Foundation award and in 2008, the City of Calgary Signature Award. He was awarded the Queen Elizabeth Diamond Jubilee medal 2012 and in 2013, the American Astronautical Society and NASA for the earth applications of space technology. He received the CIHR-CMAJ Top Achievements in Health Research Award in 2013 for his scientific accomplishments. He has given over 260 national and international lectures and published 190 manuscripts, 15 patents and 29 book excerpts. In 2011, Sutherland was appointed to the Order of Canada for his lifetime achievement in healthcare innovation and in 2014, was inducted into the Space Technology Hall of Fame for neuroArm. In July 2015, Dr. Sutherland was awarded with the NASA Highest Technology Achievement  Medal for his work on neuroArm.