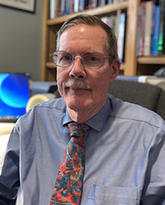 1. I have had an interest in the NMDA receptor for some time and the paraneoplastic neuroautoimmune disorder (NMDA receptor encephalitis) that it causes. Am one of the founding directors and the Basic Medical Science Director of The NMDA Receptor Encephalitis Foundation, Inc., headquartered in Ottawa. In this disorder, we cannot see 40% of the tumors that initiate this disorder, largely because they have a cell mass of less than 1 million cells, the limit of resolution of the MRI. I have found two biomarkers that may be useful in finding small tumors in this disorder and in tumor metastasis. Microscopic immunohistochemical confirmation of these biomarkers has been done in Karl’s lab, but we need to characterize them biochemically before we publish.

2. I also have an interest in the ING family of proteins and their effect on stem cell differentiation.

I came to Canada 31 years ago and have been doing teaching and assisting in cancer research across Canada ever since. I did my first post-doc at Chalk River (at AECL now Canadian Nuclear Labs) examining the effect of background radiation on a rodent species (deer mouse) that lives near uranium tailings. My second post-doc was at Calgary primarily teaching medical students but also some graduate courses. I began to resume my imaging small tumor research (begun at McMaster) in Karl Riabowol’s lab during this time. I also have written, in collaboration with 3 clinicians at Yale and Hanan Bassyouni, an endocrinologist at Calgary, a textbook in medical endocrinology which includes discussion of endocrine tumors, including several malignant and benign endocrine tumor case studies. The text is  out late this fall (Elsevier is the publisher). I am also working on an integrated pathology-anatomy-physiology-pharmacology-radiology text with 3 clinicians at New York University and, as consultants, with Chris Naugler in pathology and Director of UME at Calgary and Phillip Xiu at Cambridge in the UK. This text is for medical students and follows Calgary’s approach to medical education. Neoplasia is one of our chapters. It is also published by Elsevier and will be out in 2021. I have also contributed to other medical textbooks. Currently, I am contributing chapters to a textbook on obesity including the relationship between obesity and colorectal and small intestinal malignant tumors. This text project is headed by a clinician at Brown University. As my affiliation on these books (and eventually some papers from Karl’s lab), it would be nice to promote the Arnie Charbonneau Cancer Research Institute.