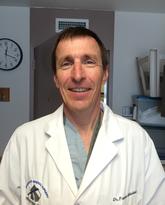 Dr. Sutherland graduated from the University of Calgary Medical School and did his General Surgery Residency in Calgary. Upon completion he then went to the University of Western Ontario and completed a Fellowship in Transplantation under the mentoring of Dr. Bill Wall. Upon returning to Calgary he initially was involved in the Organ Transplant Program. He then focused his surgical career on Hepatobiliary Surgery by taking a one year sabbatical to work under Professor Bernard Launois at the University of Rennes in France. Dr. Sutherland has been a Faculty Member since 1990 and is currently at the Foothills Hospital. His clinical practice evolves around General Surgery with a strong focus and interest in hepatobiliary and pancreatic surgery. He is an integral member of the Hepatobiliary Multidisciplinary Clinic at the Tom Baker Cancer Centre. His research interests have evolved around studying the hepatobiliary anatomy and has made innovative observations in this area. He has also studied the ways to minimize blood loss during major hepatic resections and has an interesting in pancreatic cysts.