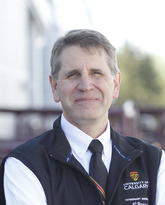 Dr. Cribb's research program focuses on molecular mechanisms of drug and chemical toxicity in animals and humans, and the pharmacogenetic basis of adverse drug reactions and cancer susceptibility. He is particularly interested in the molecular genetics of species and individual differences in response to drugs and chemicals, with an emphasis on idiosyncratic drug reactions.  Current work includes the role of estrogen metabolism in human breast cancer risk and the efficacy and safety of non-steroidal anti-inflammatory drugs.  His work has been funded by the CIHR, the Atlantic Innovation Fund, the Canadian Breast Cancer Research Initiative, and others.

Alastair Cribb completed his DVM degree at the Western College of Veterinary Medicine in 1984. Following an internship and two years in mixed practice in the Maritimes, he obtained his PhD in pharmacogenetics/clinical pharmacology at the Hospital for Sick Children, University of Toronto in 1991. He followed this with an MRC post-doctoral fellowship at Dalhousie University. He then spent four years in drug safety assessment with Merck & Co. in West Point, PA. In 1996, he joined the Atlantic Veterinary College in Charlottetown as a professor of clinical pharmacology where he spent ten years. He accepted the position of Dean, Faculty of Veterinary Medicine, University of Calgary, in May, 2006. He was previously a CIHR/MRC Scholar, a Canada Research Chair in Comparative Pharmacology and Toxicology, and one of Canada's Top 40 under 40. He was a member of CIHR's Governing Council for five years. Dr. Cribb is a Fellow of the Canadian Academy of Health Sciences.